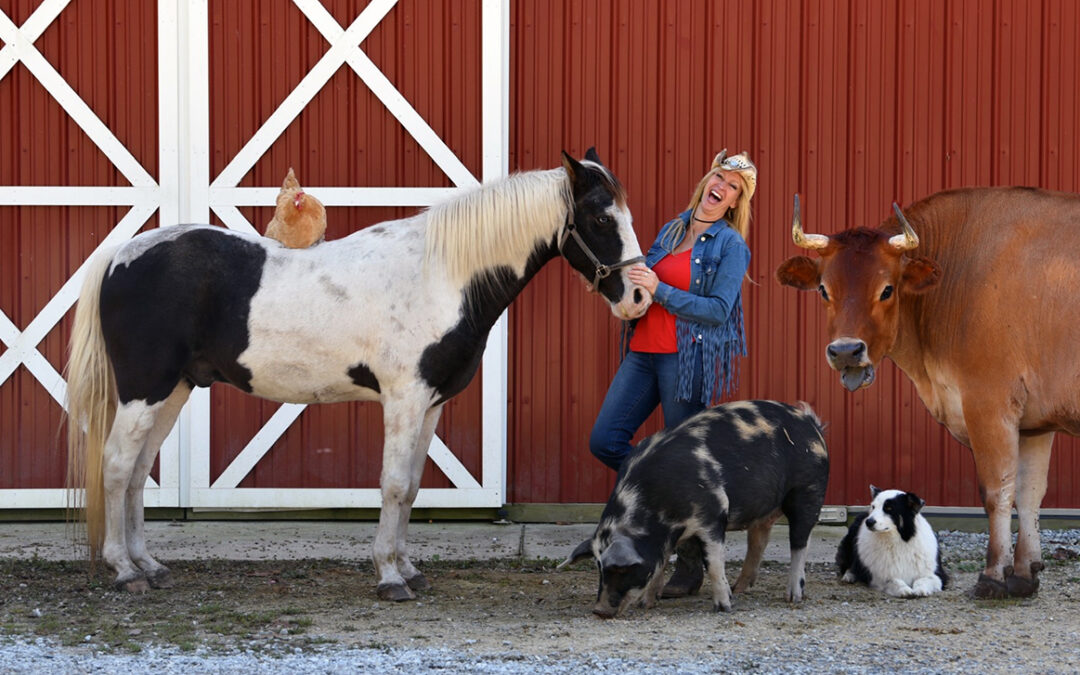 Peppered with references from the cultural milieu in which many of us and our children were raised, Laurie Zaleski’s Funny Farm is both a heartbreaking and a heartwarming memoir. It is a tribute to a mother’s love and determination as well as the resilience of children.

Living on a huge farm with more than 600 animals and dozens of temporary and short-term volunteers to share the care-taking responsibilities while she attended to her own successful graphics business isn’t exactly the life Zaleski had imagined when she was a child. Nor did it quite fulfill the promise made to her mother that she would someday have such a farm where her mother could spend work-filled, peaceful days tending to any and all animals that touched her heart.

But I’m getting ahead of myself! When Zaleski was still just a toddler, her family was living a fairytale life. Until they weren’t. When it all fell apart amidst domestic abuse and violence and betrayal, the author’s mother Annie took Laurie, her siblings, and anything essential they could fit in their car and left. Determined not to return to the nightmare that appeared to be an idyllic life to the outside world, the family took up residence in a beaten-up shack—basically four walls and a roof. To make ends almost meet, Annie worked several jobs, among them, cleaning out the cages at the local animal control.

An animal lover, Annie often took the animals on canine “death row” home where she and her kids loved and cared for them, giving them a new lease on life. The shack wasn’t very hospitable to humans or animals, but it gradually became home. Fortunately, the land on which it sat provided much space for all manner of animal life, including horses and goats, that needed a home.

Their strange, animal-filled lives and their impoverished living conditions made the kids outcasts at school, but Annie began bringing some of the animals to school, first for show and tell, then as an educational tool, making young people aware of homeless—abandoned and abused—animals. Suddenly the school “joke,” the kid with pet goats and a cow, was a pretty popular kid!

Zaleski promised her mother that one day, when she was “a successful business woman,” she would buy a farm where her mother could comfortably live the animal-filled life she wanted.

It took almost 20 years for Zaleski’s career in graphic design to result in her own successful business and for the vision of Annie’s farm to begin to come to fruition. Regrettably, Annie saw the signatures on the dotted line, but succumbed to cancer just two weeks before moving onto the property that would become Funny Farm.

Using her graphics business made creating kids books about her menagerie of animals pretty easy, but, Zaleski said, a real book “was a whole new animal… What a learning process! I didn’t know what half of these jobs [in publishing] were.” Writing the book “was like therapy,” says the author. In the photo: Laurie and Nemo by Matt Reeves

Zaleski still takes her story and animals to schools. What a sight to see her enter the school with a cow or a horse with a chicken on its back and a dog at its heels! With all of these odd animals living together, free-range—she hopes to illustrate that “just because we’re different doesn’t mean we can’t get along.”

An unexpected focus for the Funny Farm has become dogs with Megaesophagus, a disorder in which the esophagus is basically too narrow and everything consumed is immediately regurgitated. No food can pass, no nutrition can be absorbed. The first dog with this disorder to reach Funny Farm was given weeks to live. He lived for six years thanks to lots of TLC and a special chair called a Bailey Chair designed so that the dog can eat sitting up, like a baby in a highchair.

A strict vegan herself, who will “eat bark off a tree before she’ll eat chicken,” Zaleski says “we don’t talk politics, religion, or food! We’re not trying to make people vegetarian or vegan. We just want people to know where their food comes from.”

A refuge for animals and humans, Funny Farm draws supporters and volunteers from the strangest places! “People plan their vacations around us,” says Zaleski. “They follow us on Facebook! The love, love, love the animals.”

Boy Scout troops volunteer, members of Surfside (NJ) AA group volunteers. For some it’s pure pleasure, for some it’s therapy, for some it’s community service hours! Volunteers choose what chores they want to do. Who knew cooping manure could be relaxing and therapeutic!

For Zaleski, Funny Farm “is my church… Stress and problems melt away! It’s so joyous to see all the animals, who are not exactly natural allies, getting along like brothers and sisters! They’re so happy and appreciative!” For her, the bottom line is “Never give up! Every living thing deserves a chance!”

Now, boasting unique mix of pets, livestock and beasts of burden, a core of dedicated volunteers, a presence on FB, and 501(c)(3) status, Funny Farm, In May Landing, NJ (just a half an hour from Atlantic City and about an hour from Philly)–“full of animals and fit for lunatics”—is a modern day Noah’s Ark.

In the photo: Barn photo of Laurie with Adele the Chicken, Stormie the horse, Ducky the pig, Farley the dog, and Yogi the steer by Amanda Werner.