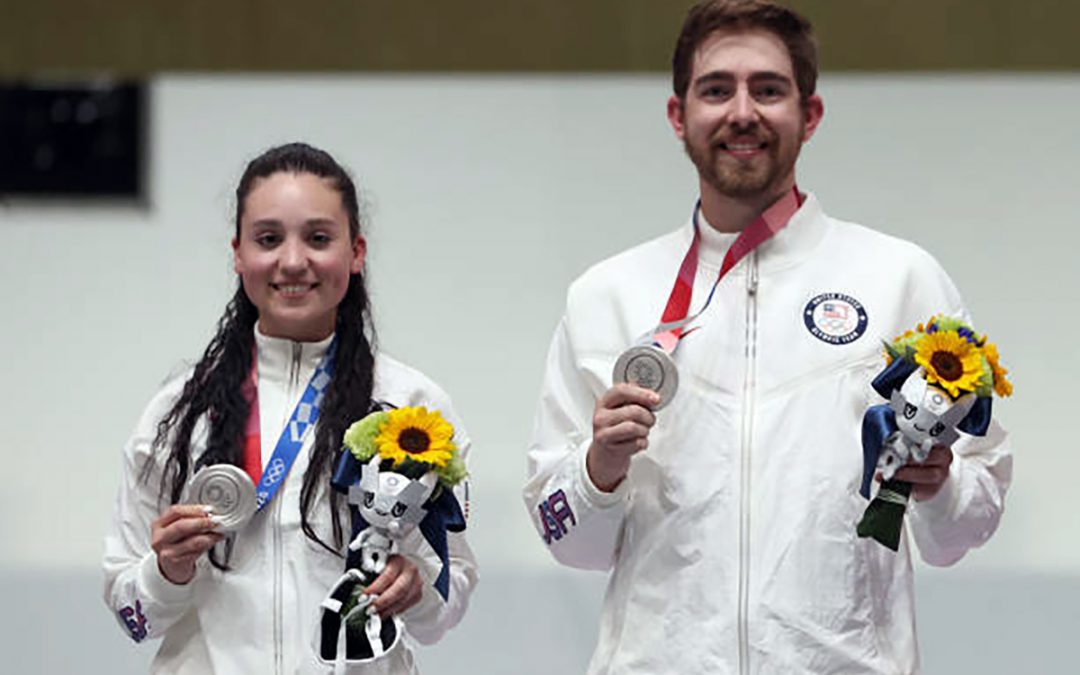 When Mary Tucker, from Sarasota, mentions her sport is shooting, she typically gets one of two reactions: “Oh, so you ski.” “Oh yeah, the ones where the things fly.”  “People think of shotgun [skeet] or biathlon,” Tucker explained.

Tucker, who won a silver medal in the new mixed team air rifle event, succeeded with her teammate Lucas Kozenisky.  The journey to a silver medal was not without challenges.

“I was 14 and picked a high school my mother didn’t want me to go to.  She said, ‘Fine, if you go there, you have to be on a sports team. I don’t know why. I guess she wanted me to be involved in something.’

“They had a night where you could see all the different teams.  The shooting team had a big banner with a rifle on it.  She tried to steer me away from that.  I said, ‘No, no.  We’re going to that one.’

“When I first started, I was very, very bad at it.  We had 20 people on the team and I was probably the worst.

“The high school coach knew I wasn’t very good and he made that known. I started becoming a little bit better and beating some of the other team members.  He said, ‘I don’t need you to be great. You need to settle for good.’ That did not sit well with me.

I ended up quitting the team. Olympic medalist Mary Tucker. In air rifle, competitors stand and shoot for 30 minutes at 30 targets or longer. The rifle weighs about 12 pounds and is held as depicted here. Photo by Sarah Caputi │UK Athletics

“I was very fortunate to find my personal coach, Jaime.  She came up to a state qualifier.  She was supposed to be looking at the team I had just quit.  Our high school coach had asked her to come up and look at shooters on the team.  I ended up going and won.  Jaime asked, ‘What about that one?’  ‘No, no, no.  We don’t really talk to that one.’  Jaime replied, ‘but I like that one.’

“Jaime is very experienced.  She’s been to two Olympic games herself.  She saw me and said, ‘I see potential.  We’re going to make you the best.’”

In air rifle, competitors only shoot from one position – standing.  The target is about the size of a half dollar from 10 meters away (33 feet).  In individual competitions, shooters take 60 shots in 60 minutes in the qualification round.  Think about it.  Shooting accurately at a small target for one hour, all the time holding a 12 pound rifle.

Even in the mixed team event, it is individual.  “There were about 20 teams at the beginning.  Everybody shoots 30 shots in 30 minutes all at the same time.  Partners scores are then put together,” explained Tucker.

To become that good, Tucker spends many hours on the range shooting.  She also works out three times a week doing cardio, weights and other training.

While many athletes isolated from others due to Covid-19, Tucker did interact with others.  “Everybody is really open to talking with each other.  You’ll be walking around and people will walk up, ‘Hey, what sport are you?’  ‘What country are you from?’  ‘Do you have a pin?’  Pins were a big deal.  The whole atmosphere of the games is really cool.”

Tucker is studying kinesiology at the University of Kentucky and wants to go into coaching. She will continue to compete at the college level and has her sights set on the next Olympics. She graciously gave us some time the day before starting classes. We thank her and wish her all the best in her future endeavors.

IN THE TOP PHOTO: Mary Tucker and Lucas Kozenisky won silver in the mixed team air rifle event.  Unlike archery, all competitors shoot at the same time and their scores are combined when the time has expired.  (Photo courtesy of Mary Tucker).