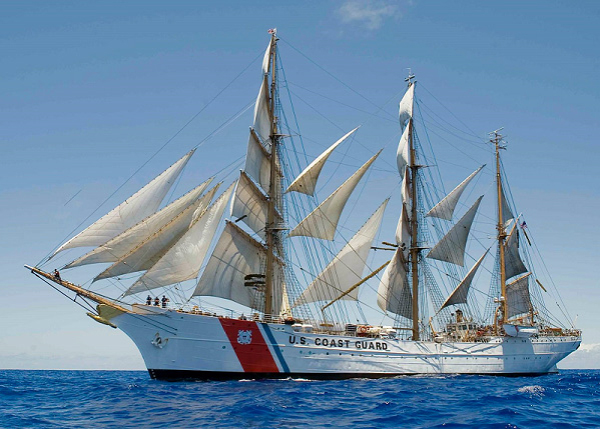 Welcome aboard! You are invited to visit “America’s Tall Ship.” Since 1946, every new Coast Guard cadet undergoing officer training has begun their career by learning to sail on Eagle – the traditional way. Eagle has offered generations of Coast Guard Academy cadets, and more recently, officer candidates, an unparalleled leadership experience at sea.  They are always looking forward to incredible voyages of safe and exciting sailing, hard work, and in-depth leadership training with the future officers of the Coast Guard.

The primary mission of the Eagle is training. Every cadet who attends the Coast Guard Academy will spend a minimum of six weeks on board Eagle. In addition to learning the nautical traditions of their profession, cadets learn basic seamanship and navigation skills and important team-building and leadership skills. The ways of old still have much to teach. The conditions and situations you face under sail can’t be replicated either in a classroom or aboard today’s modern ships. Onboard Eagle, cadets find themselves suddenly out of their element. Dependent on wind, waves, and currents, they quickly learn how these forces of nature affect a vessel. They become skilled in ship-handling, decision-making, and meeting unexpected challenges. They learn the importance of crew members working together to handle the ship safely. USCGC Eagle also performs a public relations role for the Coast Guard and America. Eagle welcomes the public for a visit during domestic port calls and calls foreign ports as a floating goodwill ambassador for US diplomatic relations. Eagle has hosted Presidents Kennedy, Nixon, and Truman. When Tall Ships gather together, we are most likely to see Eagle leading the parade.  She is a tremendous draw for visitors. This past summer, she was in Reykjavik, Iceland. Repairs kept her three additional days in port and during that time was visited by 18,000 people.

By 1979, the Coast Guard had developed plans for an extensive refit at the Coast Guard Yard facility in Baltimore. From 1979 to 1983, Eagle visited the yard all four winters between summer deployments. In 2014, Eagle began a similar refit. The ship’s crew temporarily shifted its administrative homeport to Baltimore and began an extensive four-year service life extension project. Each year, Eagle will spend six months in the Coast Guard Yard Facility. The goal of this maintenance overhaul is for the ship to remain safe and viable as the Coast Guard’s premier training vessel well into  the Eagle has offered generations of Coast Guard Academy cadets, and more recently officer candidates, an unparalleled leadership experience at sea.  They are always looking forward to tremendous voyages of safe and exciting sailing, hard work, and in-depth leadership training with the future officers of the Coast Guard.