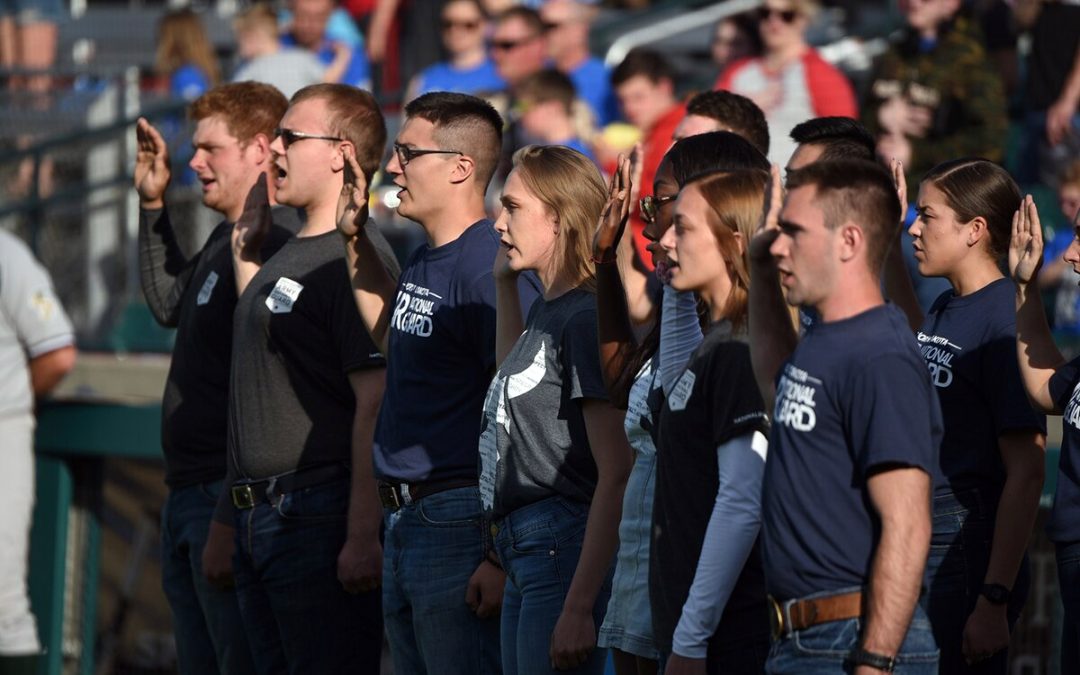 The dogs started barking as he came up the walk. They are always excited to see him, as are his not-so-little-anymore brothers, who got to the door just seconds after the Golden Retrievers. My eldest son, Christian, was home for a visit.

A year removed from finishing his six-year hitch in the United States Air Force, Chris had something on his mind to share with mom and dad. After a few compulsory minutes wrestling with his brothers, he sat down at the dinner table. I offered him a beer.

So, I’m thinking about re-enlisting, he said. No preamble, just right into it. That’s Chris. Especially when he’s pretty close to a decision about something. Into the Army this time… he said. They have the job I want, and they’ll let me keep my rank. This was offered as tentative information, but I could tell his mind was, mostly, made up. More than mostly, it turned out.

A few weeks later, I dropped Chris off at the recruiting office. He was scheduled to fly out for Basic Training early the next day. The first of many early days in his imminent future. And, now, we wait. It will be at least five weeks before we will hear from him. He’ll miss Thanksgiving, then Christmas, then New Year’s. He graduates One Station Unit Training (OSUT) on Valentine’s Day. Where to next? Only the Army knows.

As I sit here, recalling that dinner table revelation, my mind drifts back about twelve years, to the day a 14-year-old kid sat down across from me at a different dinner table in a different house with something similar on his mind. Dad, I think I might want to go into the military. He was tentative then, just feeling out the idea. At 14, four years until graduation seems like an eternity. I told him I would be proud of him, no matter what he chose, and that his mother and I loved him, and wanted him to do what was right for him. Do some research, we said. Talk with family members and friends who served. Take what the recruiters tell you with a grain of salt.

As I write this, Chris has just begun his first day of OSUT, along with thousands of other recruit trainees. Unlike most of them, he enters training as a sergeant and a seasoned veteran. Which, I’m sure, the Army DIs will make sure he remembers. It’s their job to prepare these brave young men and women to join the approximately 1.4 million Americans serving in the United States Armed Forces.

In addition to those currently serving in either active duty or the reserves, there are, depending on your source and the year, between 18 and 22 million military veterans in the U.S. population. Nearly half of these are over 65 years of age. Many volunteered, others were drafted. What every one of them has in common is that, when their country called, they raised their hand.

On November 11, we come together as a nation to honor their commitment and their sacrifice. A service is planned in SCC at Community Hall. Many others will be held throughout the Tampa Bay area, across the country, and around the world. Like as not, my son will spend the day rucking through the woods with his platoon.

Tens of thousands of deployed Americans will spend the day set aside to honor them aboard ships with no land in sight, or in tents far from home, or on dusty roads somewhere in the desert or in the mountains of some global hotspot. Others will spend the day in tanks stationed along the DMZ in Korea, or in administrative buildings in Kuwait, England, or Germany. Some will be on training missions in undisclosed areas or piloting aircraft to enforce no-fly zones. They live and work and play on bases set behind tall fences, a world removed from civilian life; or they live next door, sharing the same roads, shopping at the same supermarkets, and sending their kids to the same schools as you and me.

Over the past decade or so, it’s become cliché to “Thank a Veteran,” almost as reflexive as saying, “Happy Holidays.” While the impulse is good, we should be careful not to allow the well-wishes to become mundane. Honoring veterans, no matter when, where, or why they served, is the duty of every American. Whether or not we agree with the reasons or the wars, all of us who live in the Land of the Free should appreciate everyone who swore to “support and defend the Constitution, and to bear true faith and allegiance to the same…”

It’s the least we can do for those who put the most on the line.